So many people are asking me how's it going with work and what it is exactly that I'm doing here these days. I will try to answer.


The next project I'm involved in here, which is the second one during this internship I'm doing at HAU theater, is an event that will take place at the end of May in Spreepark, the shut-down Luna park located in east Berlin's Treptower park, that's been closed to the public since it went bankrupt in 2001. The theater and the guys from performance group Showcase Beat Le Mot decided to make the place live again for four days (this is what they can afford) during which there will be some shows, games, lectures and tours around the area.

The main thing that Showcase is working on at the moment is the construction of a 6-8 meter high man that will be build gradually during three days by themselves and volunteers and then burned down on the end of the third day.
As part of this internship here, the HAU curator Stefanie Wenner introduced me to the Showcase guys and they suggested I go to one of the guided tours given in the place (it's the only way to legally get in there now) and see if I have any ideas to do something there. Below are some of the pix I took on that tour. So we went there - I'm not switching to the royal plural, nor I'm referring to the voices in my head, it's the good old annoying couple talk again - and came up with many ideas, most of which were of course way too expensive or dangerous; for example, to create a bumping cars ride with electric wheel chairs - this has to happen at some point!
So what we're left with are three main things, that we are now working on trying to see what it takes to get them to happen properly:


the Catastrophe Clock
The Catastrophe Clock is a sound installation Maya and me made, which was first presented at an outdoor exhibition in Holon's Center for Digital Art in 2007. It's actually very simple: once an hour, exactly on the hour, a soundsystem plays a recording of screaming people, when the number of the screams heard tells the time: at one o'clock one scream, at two two screams etc. When we did it it was quite cool because it gives a very basic service to the people around and at the same time disturbs them in a funny way. In the context of the luna park it can be even more relevant, as this is actually something that happens quite often when you attend an operating Luna park; these screams that appear every now and then from a scary attraction somewhere, so it can not only tell the time but also function as a little "ghosty" action, maybe reminding the audience how this place sounded like. The speakers will be located on one of the beautiful dis-functioning roller coasters (see pix below). That is, if the budget and limited technical options will allow us to do it...

a Silent Disco Party
The guys from showcase want to have a "silent disco", a party where people dance with personal headphones. It's gonna happen inside a tunnel in one of the old rides, but unlike the classic version of this event, the music will be Schubi and me DJing. Each person at audience will be able to switch between our two channels: heavy beats, hip hop classics and filthy pop (moi), or white trash, 80's rock, disco and filthy pop (the Schub). This wasn't our idea but a task we got from them and accepted happily. If everything will happen according to plan and Maya will make it here for the Lunapark, we'll also get a third channel for her, which for sure will be great.


Telekinesis courses
Those who know me well knows I'm very interested in supernatural shit like seances, Parapshychology, and other phenomena of similar problematic nature. When I was in the tour in the Spreepark I remembered a work by my friend and great artist Sofia Hulten, which made couple of videos where she's trying to move objects using Telekinesis techniques she learned from a tutorial book. Here you can see a still from one of these videos. Developing the idea further, Schubi and me decided to do Telekienises courses to the public at the Lunapark. We will explain Telekinesis, it's history and techniques, and then with the people we will form a "concentration camp" - a place in the park where people assemble to concentrate together - and try to make the big ferris wheel move using nothing but our minds. Considering the fact that the wheel tends to move when it's windy, I think this activity will be super nice.

the 1st Berlin Mud-Wrestling Championship
Last but not least, and continuing the line of creating opportunities for people to use the place and enjoy it, we are going to announce at the last day of the Lunapark happening the first Berlin Mud Wrestling championship, where friends, family, lovers or just strangers can get in the arena and feed each other mud! Here are some wonderful examples:


And here are some pix I took in the tour: 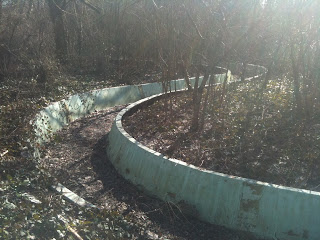 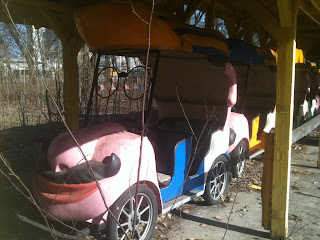 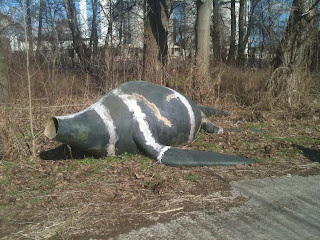 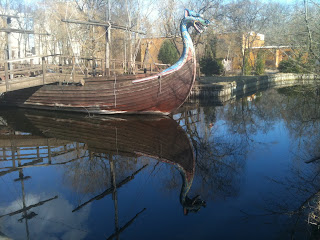