Arale just sent me this pic he took in the "Tikva" neighborhood in Tel Aviv, where most of the struggle against migrant workers takes place. It's one of the hot issues in Israel these days, as is it shelter to many immigrants and refugees from war zones in Africa. Recently, groups of Israelis started protesting around the country, calling to deport the foreigners. Alongside some official, state-paid Rabbis that not so long ago distributed a "psak halacha" (kind of a Jewish religious law) encouraging people not to rent or sell their houses to non-jews, and a series of incredibly-racist-nearly-fascist laws legislated by the government, it looks bad.

The graffiti in the pic reads "deport niggers" 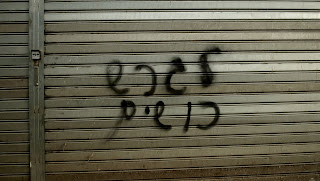